Our most ambitious field season ran from June 6 through July 28, 2012 and involved the participation of over 30 people, including the University of Arkansas’s Archaeological Field School.  Our team conducted work at four different sites, including our first excavations at both Maroni and Kalavasos.  Processing of the new data is ongoing, but some brief, preliminary observations are presented here while more detailed material is prepared for publication.  Field work included a continuation of the geophysical survey at both sites and, for the first time, test excavations aimed at elucidating the geophysical signals.  Survey at Maroni continued to focus on the area between Vournes and Tsaroukkas, with the fluxgate magnetometer producing some promising results.  We conducted excavations at Tsaroukkas along the edges of Buildings I and II in an effort to further define the building limits and chronology (Figure 1).  The excavation areas at Tsaroukkas, open since the MVASP excavations under Sturt Manning, were backfilled at the end of the season due to the ongoing deterioration of the exposed architecture.  A small test excavation between Vournes and Tsaroukkas in cadastral field 23, confirmed the presence of walls detected by the geophysics and associated ceramics suggest that the walls were of LC IIC date (Figure 2). 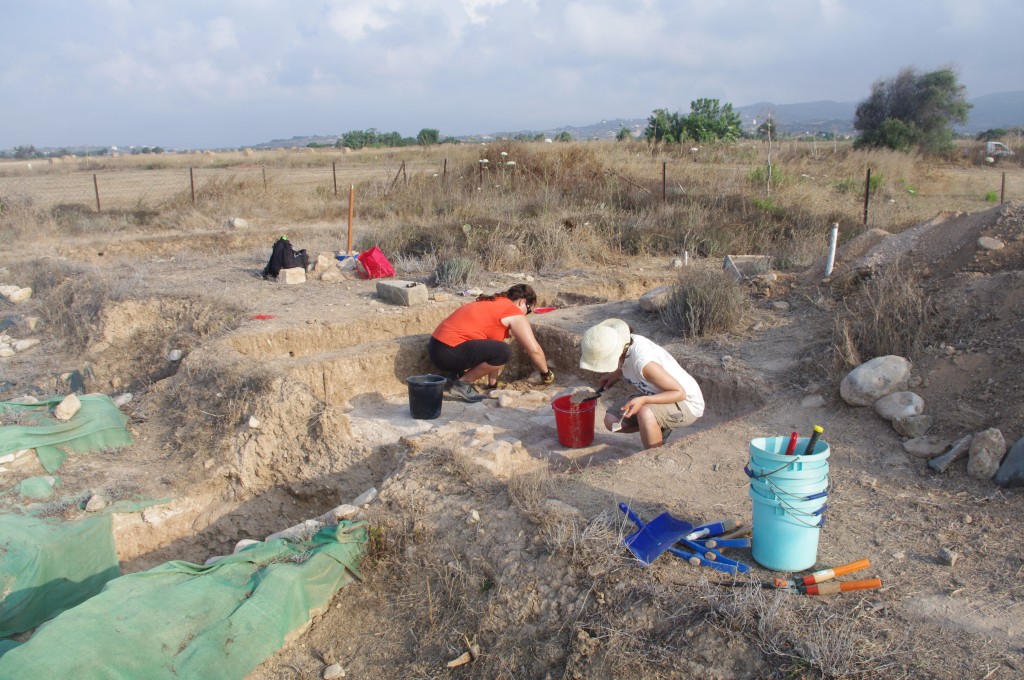 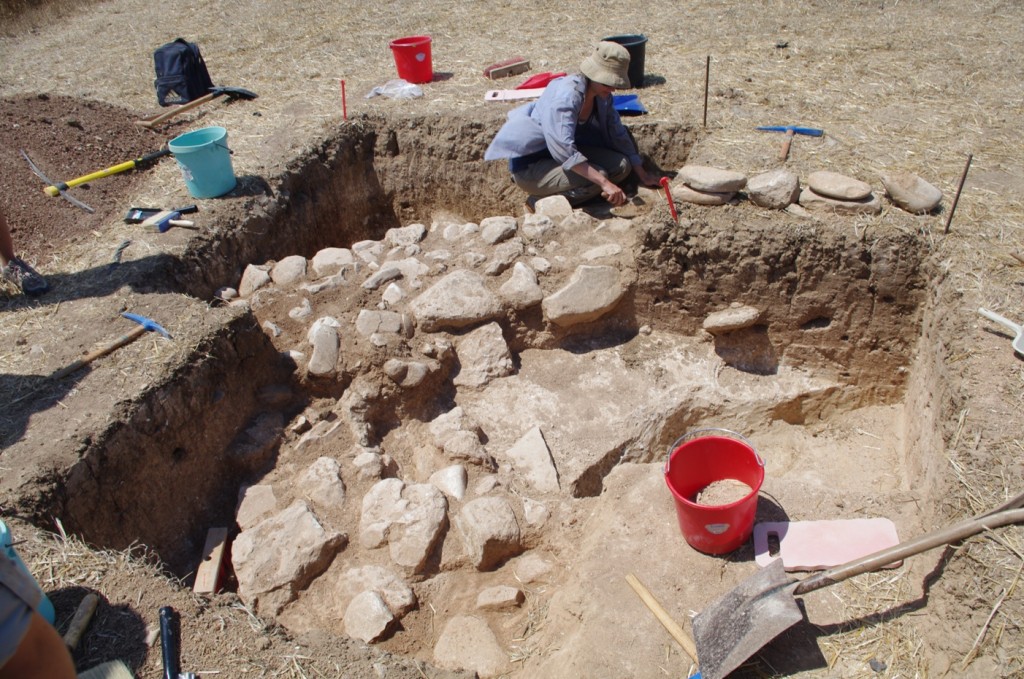 At K-AD, targeted GPR survey continued around the Northeast Area fence (Figure 3).  High resolution GPR survey by Thomas Urban (University of Oxford) recovered with unprecedented clarity the plan of a new monumental building (called Building XVI using the naming system established by Alison South) found mainly in Unit 7.  This large rectangular structure (c. 28 x 13 m) is on the same alignment as the buildings within the Northeast Area and appears to consist of a large central court with interior rooms accessed from it on either end.  We initiated test excavations on this building, excavating a 10 x 3 m trench (Unit 7 Test) that ran from the empty space to the west of the building (possibly a road), cutting across its outer west wall and into the interior rooms on its north end (Figure 4).  The excavations revealed well-preserved architecture, including the base of a staircase with ashlar steps, but we were unable to reach the building’s floor by the end of the season.  We recovered a number of ceramic vessels including pithoi and several fineware drinking vessels (all consistent with a LC IIC date), and a unique ceramic stand.  Other significant finds include several pieces of slag and a number of sling bullets. 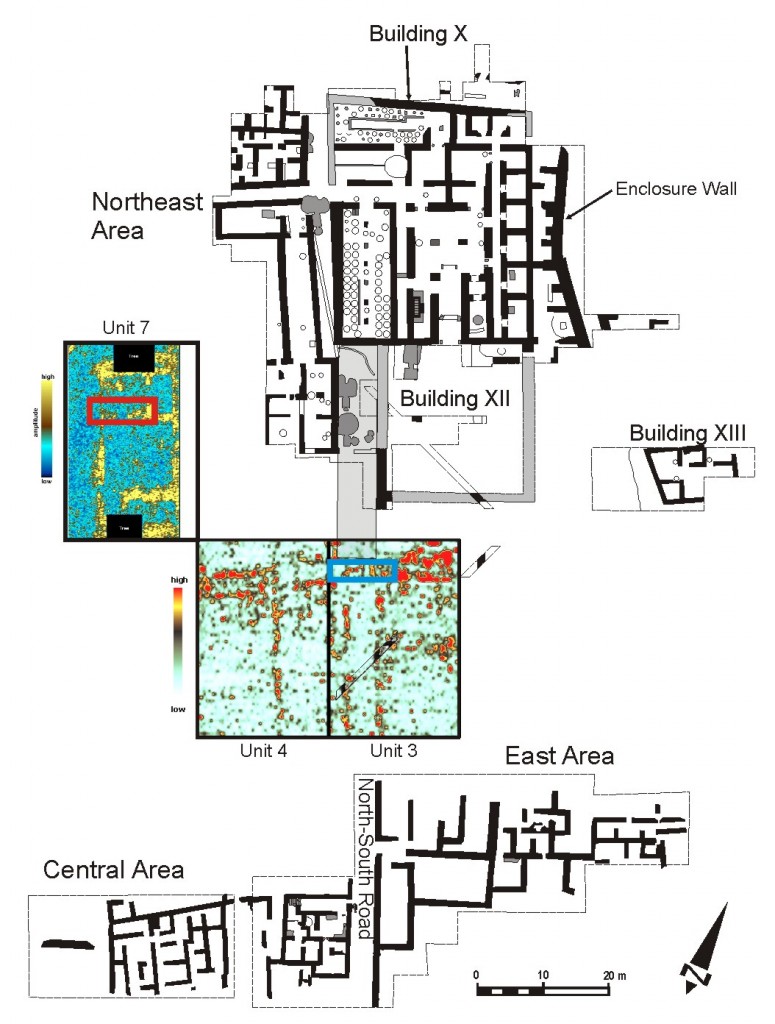 Figure 3: Plan of the Northeast and East/Central excavations areas at K-AD showing GPR time slices from Units 3 and 4 (2008) and Unit 7 (2012). The excavation trenches Unit 3 Test and Unit 7 Test are shown in blue and red, respectively. 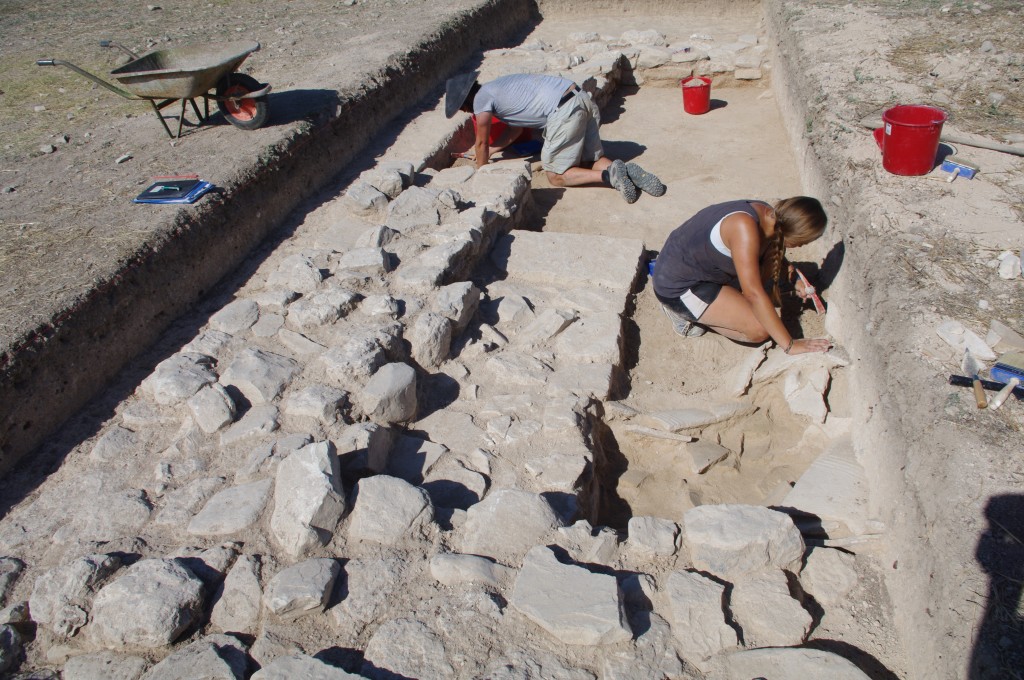 At the same time, excavations took place in Unit 3 in an effort to elucidate the 2008 GPR data that identified the continuation of the main north-south road and possible constriction point (“gatehouse”?) (see Figure 3).  We excavated a 10 x 2 m unit (Unit 3 Test) that cut across these features (Figure 5), revealing the partially-eroded plaster surface of the road along with abutting structures with plaster floors.  The features recorded so far partially corroborate the 2008 GPR data, revealing the road with structures on either side of it.  They have not, however, so far shown the so-called “gatehouse” structure in the roadway suggested by the GPR data.  It is possible that there is an earlier feature underlying the latest road surface.  Furthermore, what we identified as a possible continuation of the Northeast Area enclosure wall, appears to be narrow buildings that abut the road on either side.  Further excavation, including sectioning the exposed road surface, is needed to explain this discrepancy and to clarify the nature of the spaces on either side of the road and precisely at which point the road widens to 6 m as it approaches Building X. 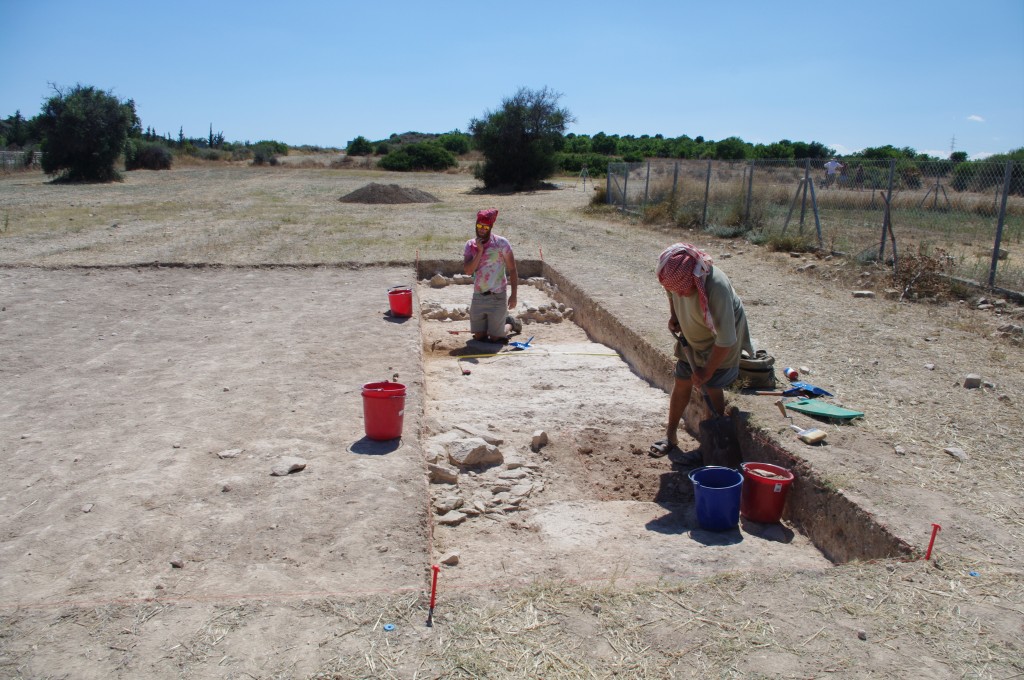 Concurrent with the survey and excavations, we continued our program of 3D laser scanning with the Leica C10, under the direction of CAST’s Katie Simon.  These scans are currently being cleaned and registered.  At K-AD both trenches were thoroughly scanned before they were backfilled.  In addition, both trenches were recorded almost daily using overlapping photos that will be used to created photogrammetric 3D images.  The Southeast excavation area (south of the highway), where Alison South had uncovered a number of domestic structures in the 1980s, was also (largely) cleared of vegetation and scanned with the C10.  As part of David Sewell’s work at Tochni-Lakksia, the section of coastal bluff that was scanned in 2011 was also re-scanned this year in an effort to monitor the degree of change and, finally, we completed the scanning of the Ashlar Building, West Building and other structures within the fence at Maroni-Vournes.