We held two 10-day seasons in June 2008 and March 2010 in order to assess the effectiveness of the various archaeogeophysical instruments under both dry (June) and relatively wet (March) environmental conditions.  This work took place at Kalavasos-Ayios Dhimitrios (K-AD) and Maroni-Tsaroukkas.  Our survey at K-AD concentrated on the roughly 30 m wide strip between the Northeast Area’s southern fence and the Nicosia-Limassol highway right of way (which now covers the Central and East excavation areas) (Units 3 and 4 in Figure 1).  Here, ground-penetrating radar (GPR) survey, in this case a GSSI SIR-3000 instrument, proved to be the most effective method, while magnetometry yielded poor results.  The GPR data have revealed a number of features that are on the same alignment as the previously-excavated architecture (Figure 2).  We have identified what is likely a continuation of the city’s main north-south road (c. 4 m wide), intersected by a narrower east-west road and flanked by at least three large, rectilinear structures.  Three sections of what may be a large enclosure wall (the remains of which were recovered along the north and east sides of the Northeast Area during the excavations) appear to run roughly east-west along the northern part of the survey units.  Where this wall crosses the main north-south road, there is a possible “gatehouse” or similar structure that controls or least constricts entry into the Northeast Area.  Beyond this point, the road widens out to c. 6 m, forming a nearly 30 m long open space that could have served as a processional route and performative space as it approached Building X. 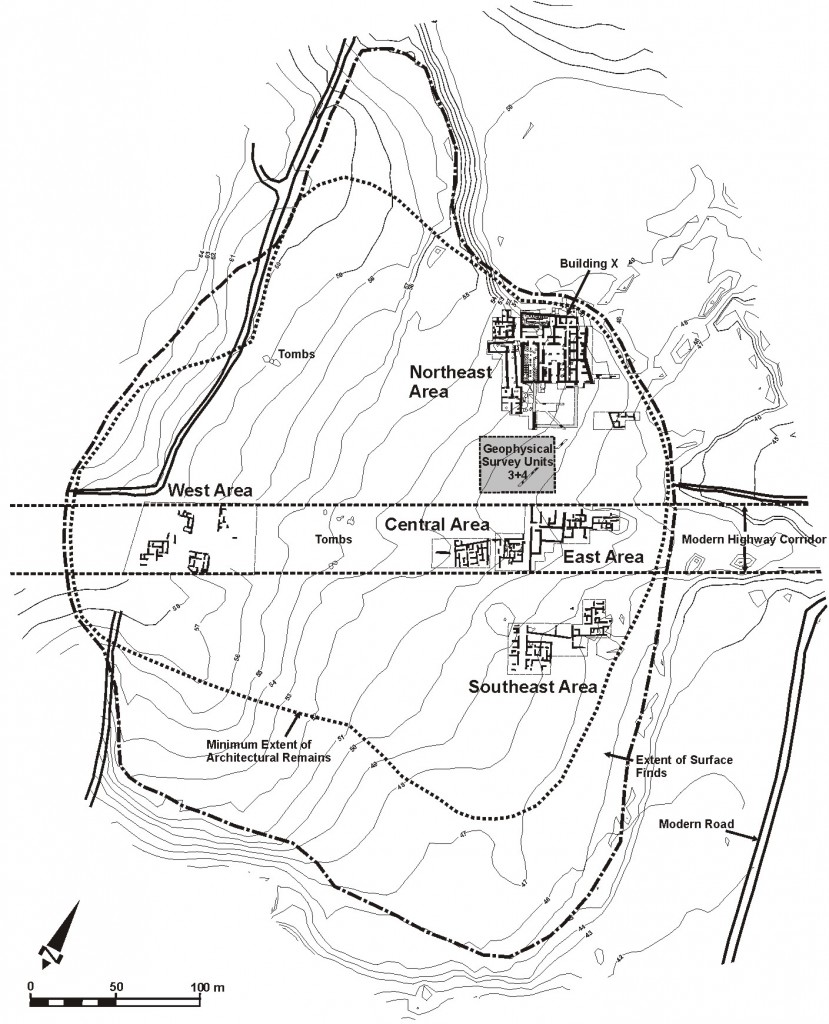 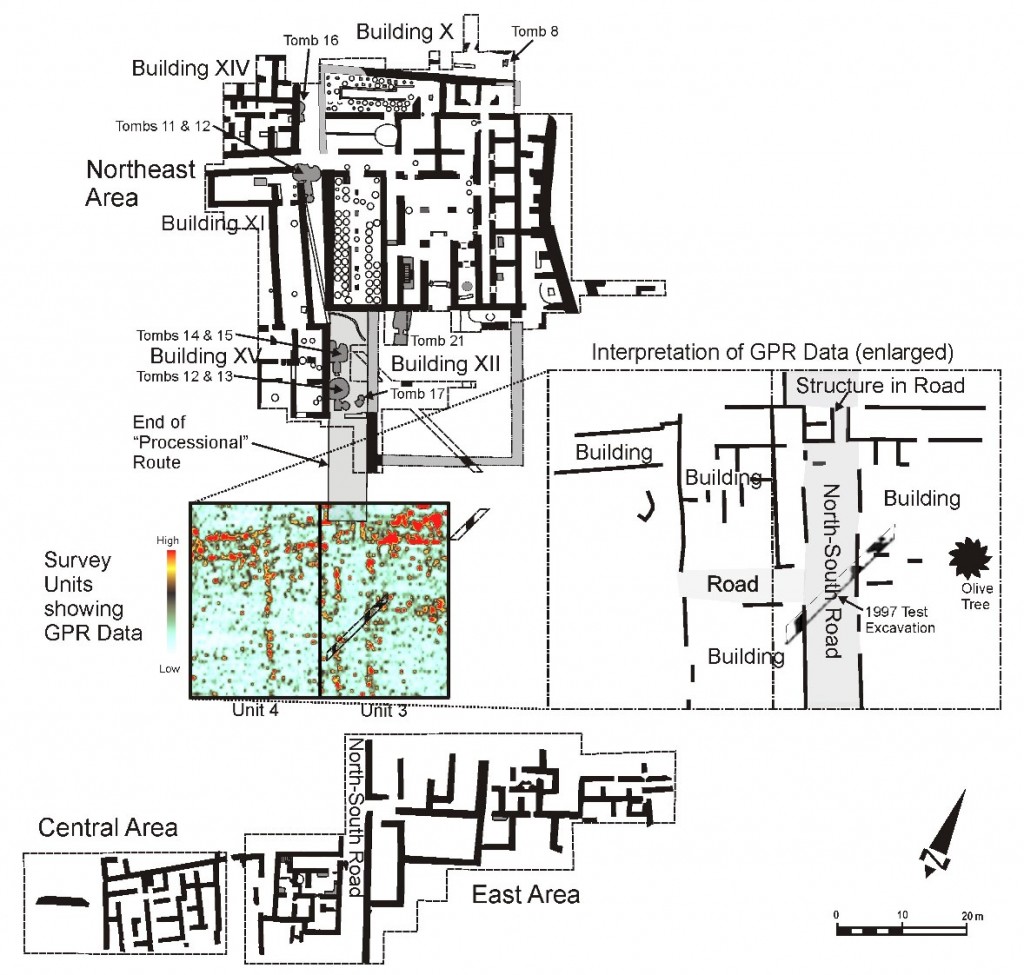 At Maroni-Tsaroukkas, four 20 x 20 units were surveyed between and to the north of Buildings 1 and 2.  Here magnetometry (using a Geoscan FM256) produced the most promising results, aided by the more iron-rich soils of the Maroni area.  This is consistent with its effectiveness in an earlier survey by John Creighton as part of the Maroni Valley Archaeological Survey Project.  Figure 3 shows the results of the fluxgate survey of Units 1-4 (re-numbered as Units 79-82 in the 2011 season), revealing several rectilinear anomalies which appear present in the data and are on the same general alignment as the extant architecture of Buildings 1 and 2.  The interpretation in Figure 4 suggests a number of possible architectural features.  Of particular note is a complex or, more likely, two separate structures in the central part of Unit 1, both of which are roughly L-shaped.  The easternmost structure bears some resemblance to the extant remains of nearby Building 2, while the western structure appears to show signs of internal partitioning.  There is also some form of complex in the southeast of Unit 3.  It is difficult at present to interpret the likely signals in Unit 4, while the large, broadly rectangular area in much of Unit 2 (and into southeast of Unit 4 and northwest of the structures in Unit 1) might as easily represent a relatively recent field division and use as a Late Bronze Age structure (and is similar to some of the larger-scale rectilinear features noted by the earlier Creighton fluxgate survey). 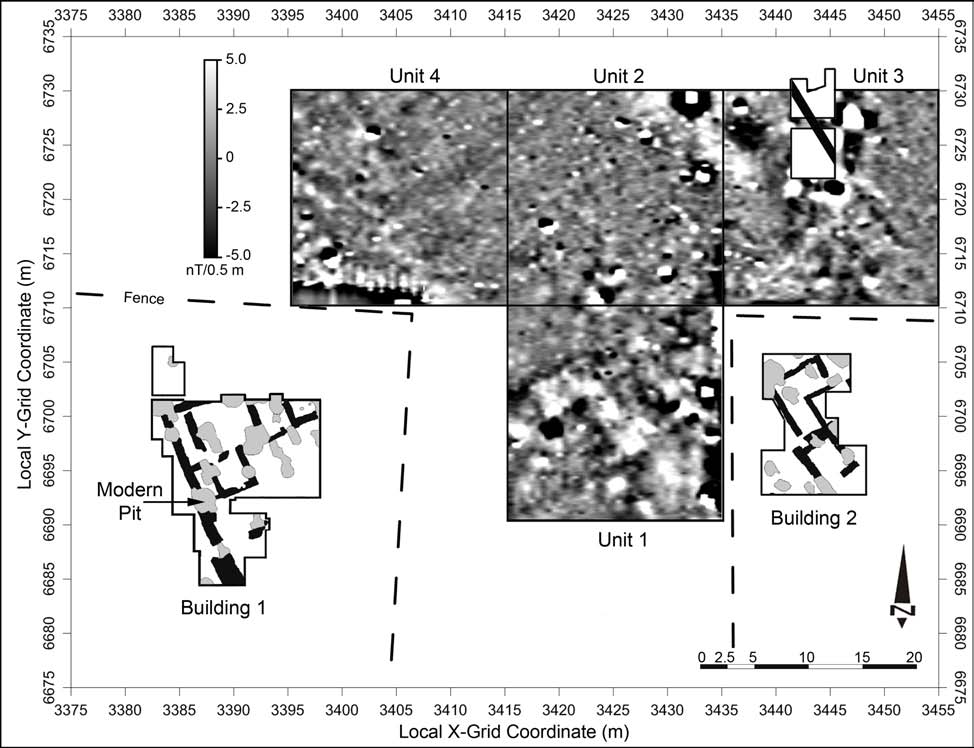 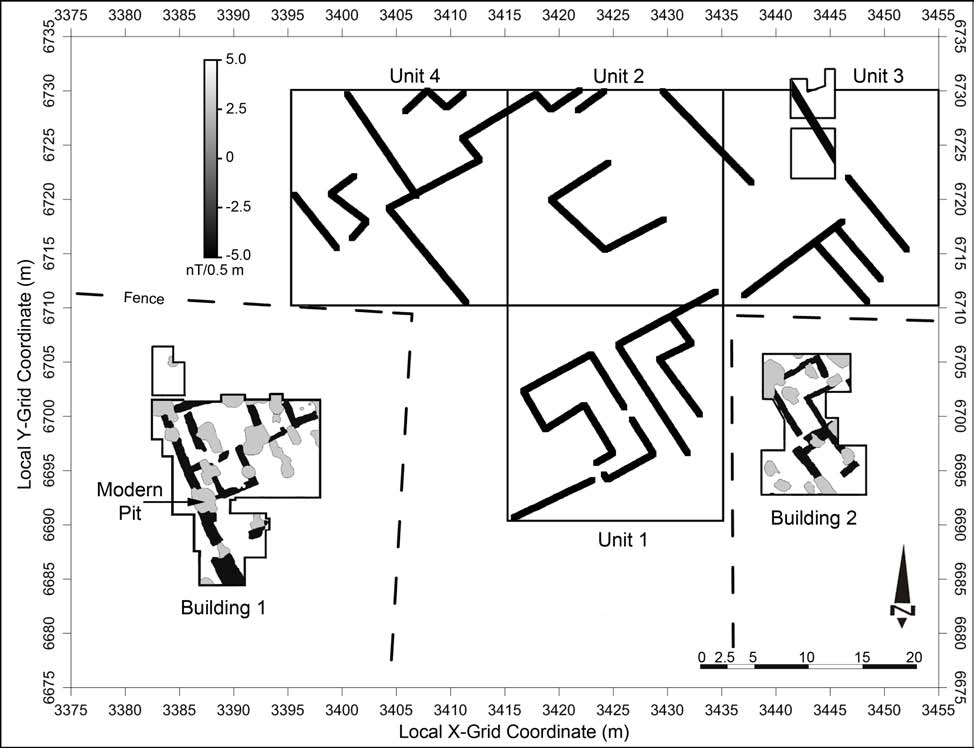 For a full report, see the manuscipt of our 2011-12 Report of the Department of Antiquities Cyprus article, currently in press:  Fisher_etal(2011RDAC)KAMBE_manuscript_Oct11.