We can define archaeological geophysics as “the examination of the Earth’s physical properties using non-invasive ground survey techniques to reveal buried archaeological  features, sites and landscapes” (Gaffney & Gater, Revealing the Buried Past, p. 12).   This type of remote sensing allows large areas to be quickly investigated for archaeological features at a relatively low cost.  It can detect subterranean features, precisely map them, and suggest interpretations based on their context, form and distribution.  Considerable advancements in terms of the range, refinement, portability, battery-life and cost-effectiveness of geophysical instruments, combined with our ability to process data quickly in the field using notebook computers, make a project such as ours feasible.  The KAMBE Project has attempted to use a variety of methods although our pilot seasons in 2008 and 2010 demonstrated that magnetometry and ground-penetrating radar would be the most effective methods given the environmental conditions during late spring-summer field seasons.  It is worth noting that electrical resistivity has been used successfully at Kalavasos-Ayios Dhimitrios in early spring surveys by John Hunt (currently unpublished).  Unfortunately, the lack of moisture in the soils during the mid-summer when the KAMBE Project holds its field seasons currently precludes its use.

Magnetic surveying methods can detect and measure small magnetic fields associated with subterranean archaeological remains, based on the presence of weakly magnetized iron oxides.  When materials are heavily-fired (usually > 600°C, although this depends the material), they acquire a permanent magnetization associated with the direction of the earth’s magnetic field within which they were allowed to cool.  As such, archaeological features such as fired-clay hearths, kilns and metallurgical facilities can be detected using a magnetometer. In addition, human occupation tends to exacerbate magnetic enrichment of surface soils through deposition of organic waste, the dispersal of fires and burnt materials, and the deposition of fired artifacts.  The KAMBE Project uses both a Geometrics G-858G optically-pumped cesium magnetometer (Figure 1) and a Geoscan FM256 fluxgate magnetometer (Figure 2).  In 2012, we also used CAST’s Bartington Grad601-2 dual sensor fluxgate gradiometer. 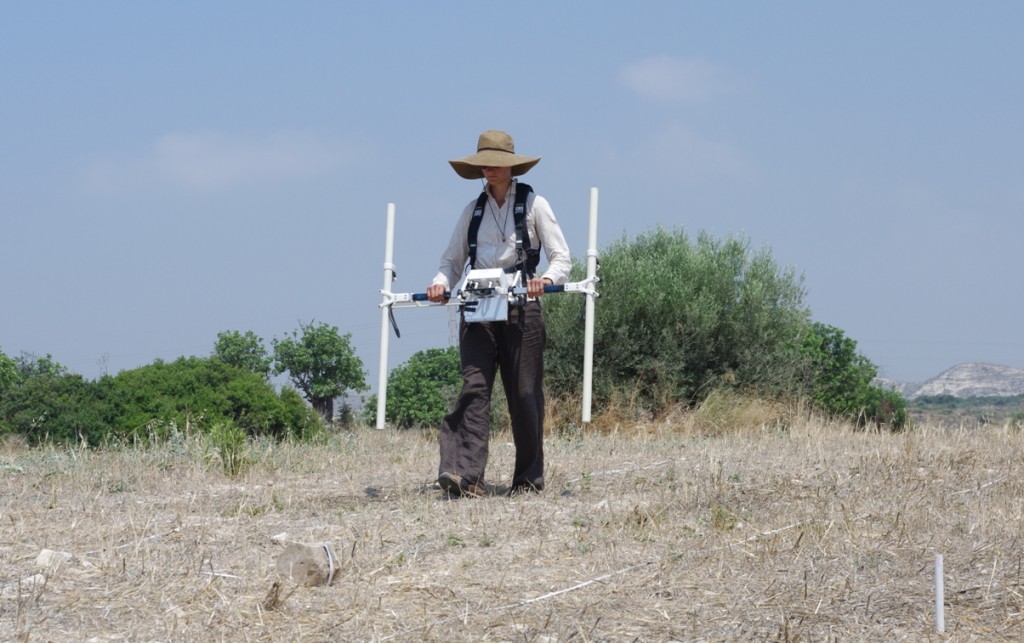 GPR uses a radio frequency antenna to actively transmit rapid radio pulses into the ground along a transect.  When these signals hit anomalies, some pulses are reflected back to the receiving antenna, while others continue into the ground, possibly being reflected back by other subterranean features.  This signal reflects more strongly when there is a large difference in the dielectric properties of adjacent materials.  A control unit records the intensity of the reflective signal and how long that signal traveled to the reflective surface and back to the receiving antenna.  This allows one to estimate the depth of targets below the surface along a vertical section.  The use of closely-spaced parallel transects also allows the data to be displayed in horizontal “time slices” where time is a substitute for depth (Figure 4).  These time slices can enhance the interpretation of GPR data because archaeological features with regular shapes, such as the walls, roads and floors that our project would be looking for, are more easily recognized in plan view than in a vertical section.

Our project has used three different instruments:  a GSSI SIR-3000 GPR with a 400 MHz antenna (Figure 5), a Mala X3M GPR with a 500 MHz antenna, and (currently) a Sensors & Software Noggin Plus with a 250 MHz antenna.  We have compiled comparative data regarding the resolution of the subsurface features using different  transect spacing and antennae frequencies.  Our current high resolution GPR survey, directed by Thomas Urban (Oxford), has been able to map subsurface architecture, including a previously unknown monumental building (Building XVI) at Kalavasos-Ayios Dhimitrios, with incredible clarity.  This will allow us to apply various socio-spatial analyses (e.g., access and visibility analyses) aimed at understanding how urban spaces shaped social interaction.  For a more detailed discussion, see our 2012 results, as well as our newly published article:  Urban, T.F. et al. 2014. High resolution GPR mapping of Late Bronze Age architecture at Kalavasos-Ayios Dhimitrios, Cyprus. Journal of Applied Geophysics 107: 129-136. 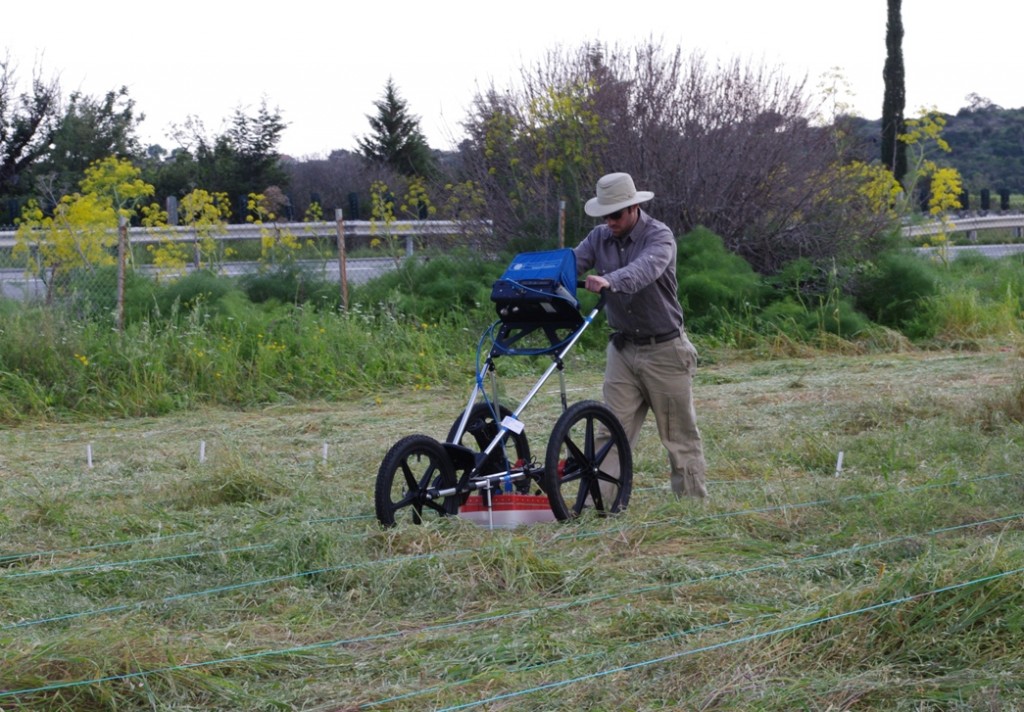