With the promising results from 2010, we held a nearly five-week field season from May 25-June 28, 2011.  The major work involved a continuation of data collection using archaeogeophysical survey in an effort to significantly expand our site coverage.  Based on data from our previous two seasons on instrument effectiveness in particular soil conditions and efficiency of data collection, we restricted our survey to the use of cesium magnetometry and GPR.  The purchase by Ithaca College of two Mala GPR units with 500 MHz antennae (used in place of the GSSI unit this season) and an additional Geometrics G-858 dual cesium magnetometer allowed us to have two survey teams working at the same time.  We conducted the survey using a grid of (mainly) 20 x 20 m units and took readings every 0.05 m along the 0.25 m spaced transects with the magnetometers and every 0.02 m along the 0.50 m spaced transects with the GPR.

At K-AD we surveyed a new area to the south of the Southeast excavation area in the hope of discerning a continuation of the main road and adjacent buildings (Figure 1).  Results showed some possible architecture but the data were noisy and, ultimately, inconclusive.  We’ll aim to re-do this area with a lower frequency antennae in a future season.  In addition, we were able to re-survey Units 3 and 4 (each 20 x 30 m) immediately south of the Northeast area, which will allow us to compare these results with those obtained using the GSSI GPR unit used in previous seasons under different moisture conditions. 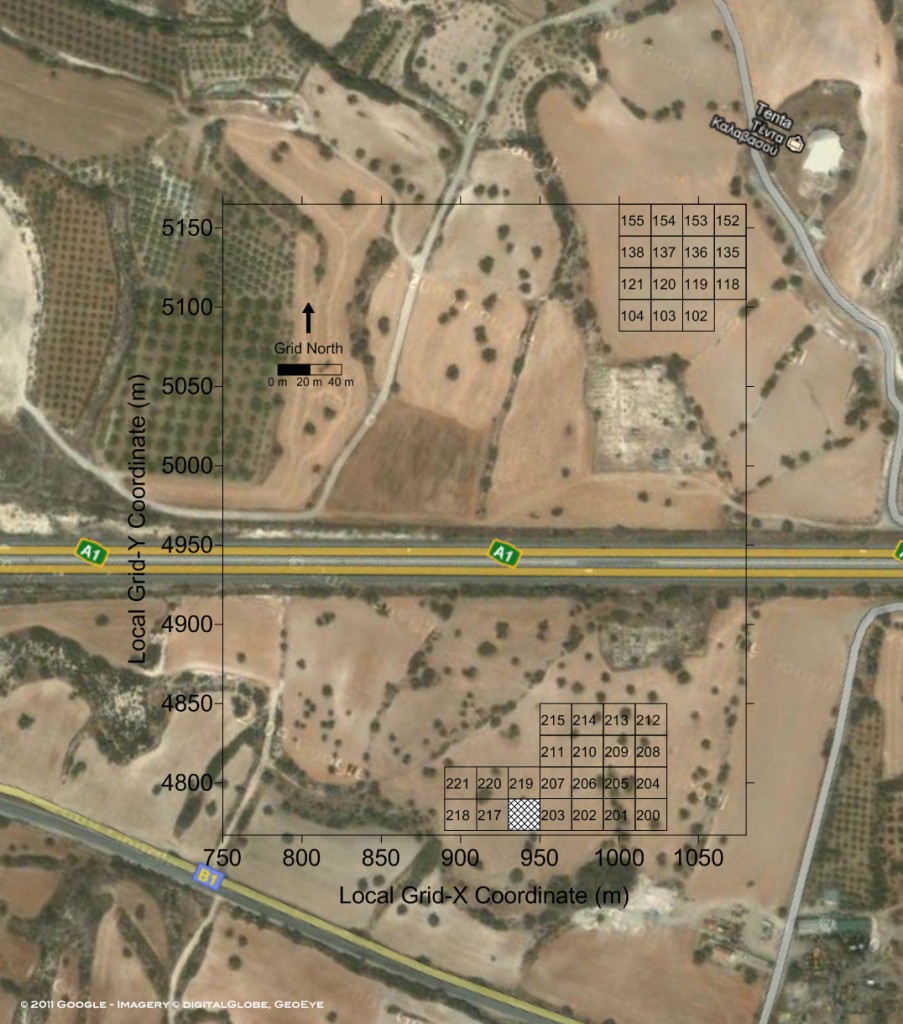 Most of our efforts in the 2011 season were focused at Maroni.  At Maroni-Vournes, we surveyed new areas surrounding the fenced-in excavations, while at nearby Maroni-Tsaroukkas, we significantly expanded the survey area started in March 2010 (Figure 2).  The preliminary results are encouraging.  For example, Figure 3 shows what is clearly a large (c. 20 x 15 m) rectilinear, multi-room structure that was detected c. 100 m southeast of Vournes by both the GPR and magnetometry in Units 44-45.  The structure appears to be on the same alignment (c. 25º west of north) as the buildings at Tsaroukkas and the LC I and II non-monumental structures excavated by Cadogan south of the Ashlar Building at Vournes.  Other possible structures were noted in this survey area (see detailed preliminary report below), undermining earlier claims (e.g., Cadogan 1984:2) that their was no habitation between Vounes and Tsaroukkas.  That said, it appears based on the evidence so far that this is a more dispersed urban form than is present at K-AD. 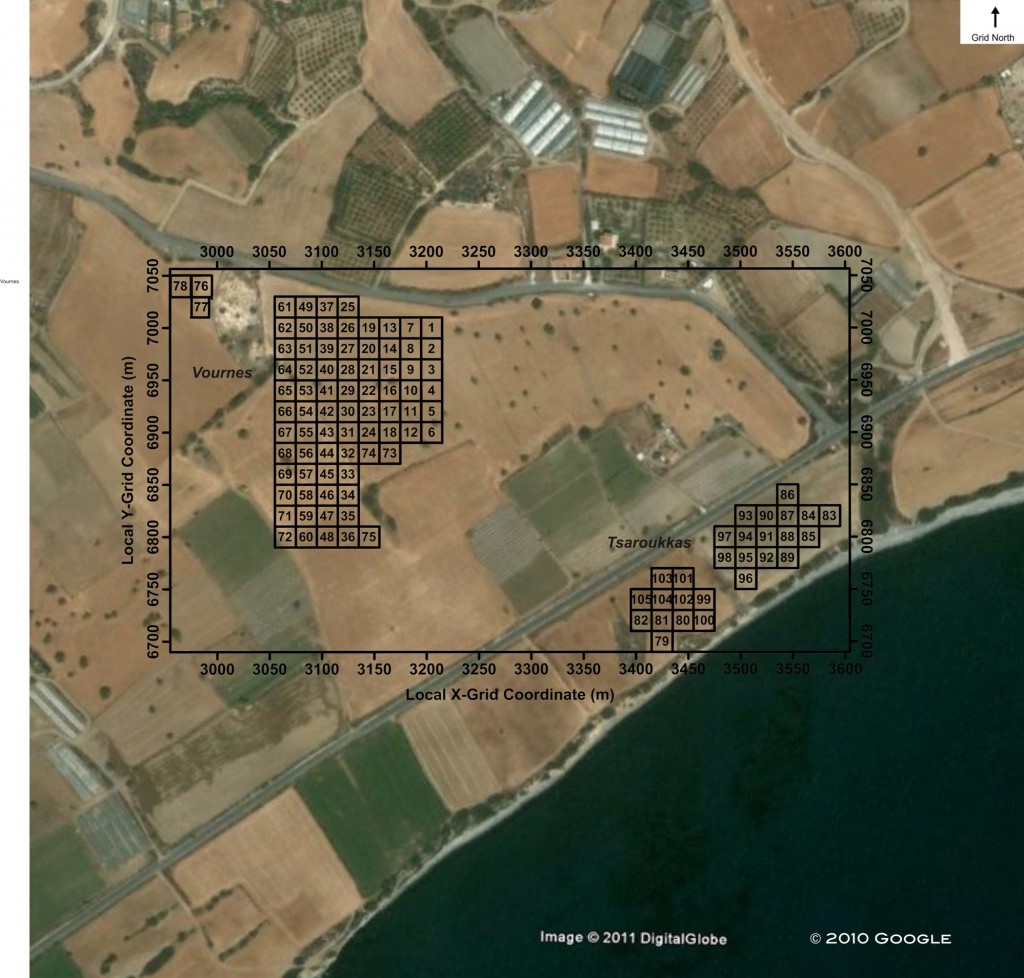 Our survey teams assisted with two other projects during the 2011 season.  We undertook a test survey at the Cypro-PPNA site of Ayia Varvara-Asprokremnos, currently being excavated by the Elaborating Early Neolithic Cyprus Project.  We also assisted David Sewell (University of Edinburgh) in his efforts to investigate the coastal site of Tochni-Lakksia, located nearly 4 km southeast of Kalavasos-Ayios Dhimitrios.  It seems likely that Lakksia served as the port for K-AD, although it also continued to be occupied into the early Iron Age.

Concurrent with the geophysical survey, we also began a program of 3D recording of archaeological features.  This involved the use of terrestrial LIDAR to make a high-resolution 3D digital record of the previously-excavated architecture at both Kalavasos and Maroni.  Over the period of a week, over 50 detailed scans were taken of the remains of the monumental buildings in the Northeast Area of Kalavasos using a Lecia ScanStation C10 laser scanner (Figures 4 and 5).  In conjunction with the geophysical survey at Tochni-Lakksia, we also used the laser scanner to record the coastal bluff where visible remains of Late Bronze Age (and later) architecture and associated deposits are currently eroding into the Mediterranean (Figure 6).  The laser scanner allowed us not only to record rapidly a 40+ m section of a rapidly disappearing archaeological site but, by repeating this scanning in our 2012 season, we will be able to determine precisely the annual rate of loss. 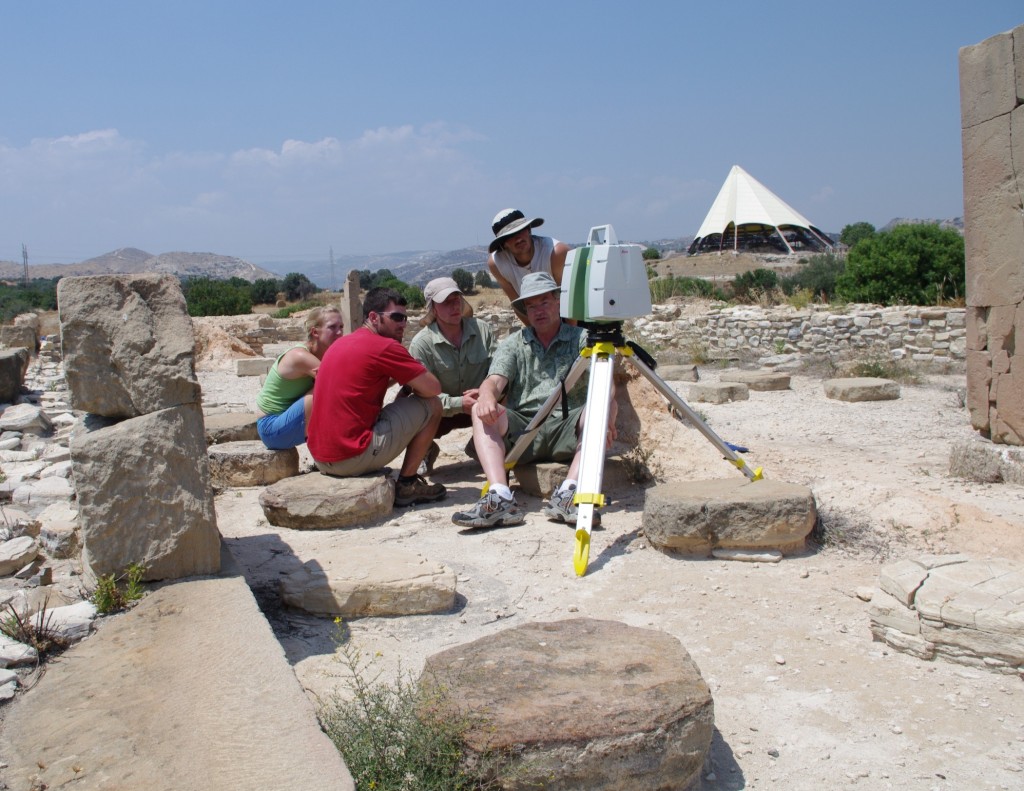 Figure 4: Malcolm Williamson with the KAMBE crew and the Leica C10, preparing to scan the Pithos Hall in Building X at K-AD 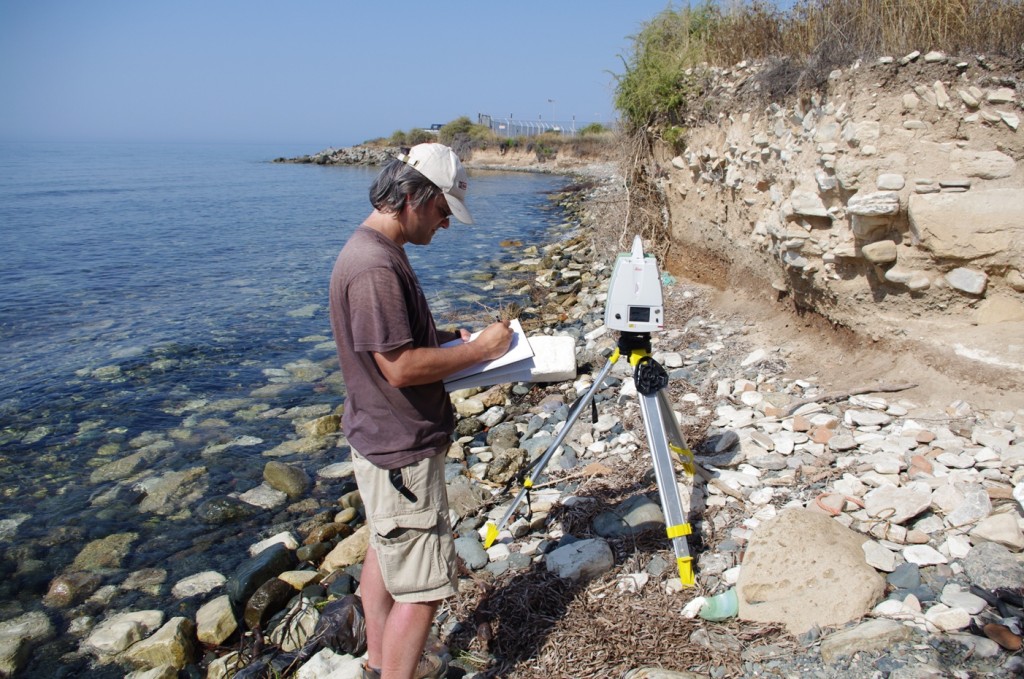 Figure 6: Kevin Fisher with the C10, scanning the coastal bluff at Tochni-Lakksia.